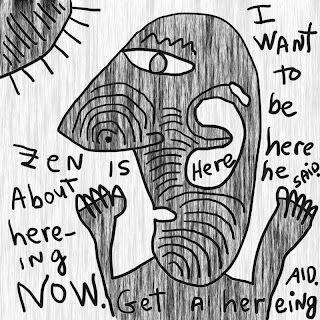 Here. Zen is about hereing (sic) now. Get a hereing (sic) aid.
I want to be here,  he said.
So I called my sister and she said that I should keep the ad for the hearing aids because so many people need them. Judging from the sound of her voice, she felt there was a moral imperative here to take the blood money (we don't refund money, she said) and support the cause of hearing aids for the hard of hearing.

I do have another sister, though, in case I need another opinion. In the meantime, I'm waiting for the ad firm in England to open up shop in a few hours.

Next planet I live on is going to be easier. There will be one answer to all questions and that answer will be obvious, right from the start. I had an aunt who'd give me answers like that until she became wiser. Now she has moved on.

And everyone on this other planet will be compassionate, even the men.
at May 02, 2010

Let me know when they start selling the here-ing aid. :)