Let the squirrels eat whatever... a view from Mars 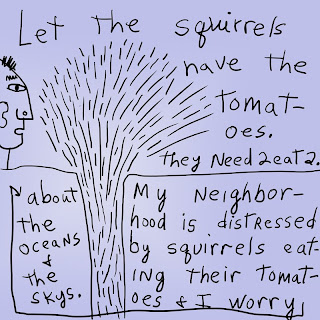 Felt like I was a man from Mars today. First off, I thought it was Thursday and acted like it was Thursday, and felt so stupid when I discovered that it was Wednesday.

Then I saw a motorcycle fly down Guadalupe at 100 miles an hour (speed limit 35 or 40). Definitely a bat out of heaven. Very startling.

Went to a store that closes at 8:04 pm. Does that happen on Earth? Got there at 8:02 pm and was able to get the ingredients for my cereal mix tomorrow.

My wife claims that it is now Anti-Itch creme by Band-Aid (I'm not being paid for this ad, but wish I was because I wasted today $10 on some junk iPad accessories and $40 on a junk electric razor)... They didn't have Anti-Itch either. Said I should go to their competitor. Walgreens is always almost empty... very strange how they keep going.

And Apple surpassed Microsoft today. 10 years ago Apple almost bit the dust. So many times I've heard, "we only support Windows." Now I'm waiting for that time when someone will say, "We only support Apples." I mentioned to someone tonight that Apple is the leading computer company. "Not really computers... that's PCs." "No," I said, "computing is changing." I understand more Internet is seen worldwide on smartphones, and there are more text messages the email messages. So maybe the PC is not how people communicate any more. PCs... the computer of yesterday... written on a PC.