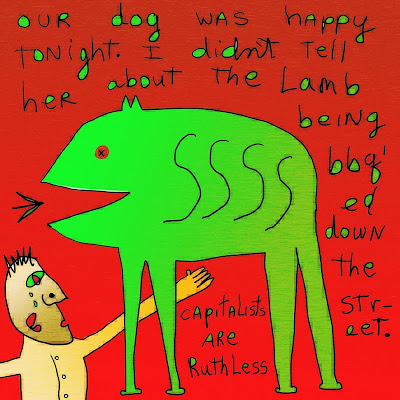 R wore a t-shirt the other night with the slogan "capitalists are ruthless." He said (from a Buddhist perspective) that no matter what you think about them, that's what they do. I didn't argue, but I thought to myself that "ruthless" has negative connotations. Yes, some capitalists probably get pleasure from stomping on people, but so do some socialists. Certainly some level of shrewdness helps a capitalist become successful, but calling them all ruthless might be going too far.

As I drive down the street, I'm amazed that most of what I see are comforts created by capitalism. Houses, cars, landscaping, and roads are all put into place to make someone money. Someone wanted to make a buck, and in doing so, improved another's quality of life. That "someone" might have been ruthless. They might have charged "as much as the market would bear." In doing so, they created a better world. I wonder what alternatives we have?

Exxon-Mobil doesn't have a great reputation for being committed toward helping others, though their foundation is quite generous, with a very generous donation to Texas Universities. Maybe not generous enough for some, but certain in the league of other large companies.
at May 21, 2010

There’s a book club at work. We read ‘Gang Leader for a Day’. It’s about a college student who befriends a gang leader in the projects of Chicago as part of his sociology research. The gang leader plays up all the wonderful work the gang does for the community. They donate money to youth programs. They have community bar-be-ques. They give people in the neighborhood protection. (All of this for a small tax-fee of course.)The gang leader sells the gang to the college student as a community based service group. But always in the back of the students mind is the drug trade, the inability of the residents to leave this gangs territory, and the violence perpetrated against any who do not submit to the gang’s agenda. And this is the face the gang leader does not readily show this student. The student sees this face usually when the leader is unaware that he is being watched.

People were quick to point out how much all this mirrored capitalism. So I started wondering what ‘gang’ occupied the territory I was in. Monsanto paid for the building. Monsanto. . . creating better food crops to fight against world hunger. Monsanto. . . creator of napalm.

As far as the word ‘ruthless’ going too far. . . ‘Capitalist do some good’ would probably not have had the same level of impact.

Miss Kate, you make a good point about overlooking the bad and highlighting the good. I agree that we need to look at the whole picture. Central Market, a wonderful posh grocery in central Austin, is having an Argentina festival. Yesterday they were burning vast quantities of firewood in preparation to roast a little lamb that was strung up by its feet. Luckily my dog can't read... or she might feel some sadness for that lamb. So, as is often the case, a success capitalist organization is promoting other cultures (good), and in the process bellowing smoke into the sky (bad) and punishing a lamb for being what it is (worse).

The brain studies show that the brain actually changes when people (i.e. politicians) get more and more, want more and more and become, shall we say, much more greedy and less concerned about the other.....

Elvis gave away plenty when he got rich... but certainly his brain changed or something happened (or didn't happen) to cause him such suffering. I think it was the bittersweet that made Graceland (even the name) so powerful.

The flaw is not the system, be it capitalism or socialism, the problem lies in seriously flawed Human nature. H.

"Serious flawed human nature." I have to disagree with that. Human nature is perfect... designed to perfection. Or maybe "just what it is" but certainly not flawed.