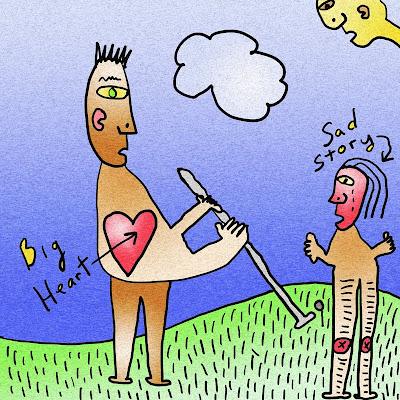 I heard a story today that has been bouncing around in my head (and heart).

A golfer from Argentina won a tournament and received a large check for his prize money. As he was walking to his car, he met a woman with tears rolling down her eyes. He asks what's wrong, and she says she has a little boy who is very sick and she is facing enormous medical bills to make him well. He promptly signs his check over to her, wishes her well, and gets into his car.

A few days later, someone who had observed his generosity found out that the woman was a crook, and decides to inform the golfer. He tells the golfer that the whole story was made up, and the woman doesn't even have a son.

This sounds like an apocraphyl tale to me. Maybe it was the alleged boys kharma? H.

I recently had a friend want to help with some medical bills. After much angst I accepted. In the end the bill wasn't as high as I expected. I called saying I wanted to give her some of her money back.
She said" Oh no. I have given that money away, its no longer mine"
Goodness abounds